The buck stops here – unless you are Theresa May

Just how does this happen?

I take responsibility for my part in this election campaign, which was the oversight of our policy programme. In particular, I regret the decision not to include in the manifesto a ceiling as well as a floor in our proposal to help meet the increasing cost of social care…….

I chose not to rebut these reports as they were published, as to have done so would have been a distraction for the campaign. But I take responsibility for the content of the whole manifesto…….

Quotes taken from The Guardian

So it isn’t just the executive arm of the UK’s Democracy that is making a power grab to side-line the UK’s Sovereign Parliament, it is the unelected advisors to Theresa May that are doing this.

Of course, I don’t seriously believe that for one moment. Theresa May must have signed off on this. As a person of the highest standards of ethics and probity she must have done?

So apart from her former confidant’s wish to puff up his CV, this can’t have any substance.

Harry S Truman had a notice on his desk “The buck stops here”, I wonder whether Theresa May has a similar notice on her desk? 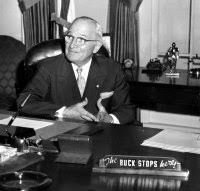